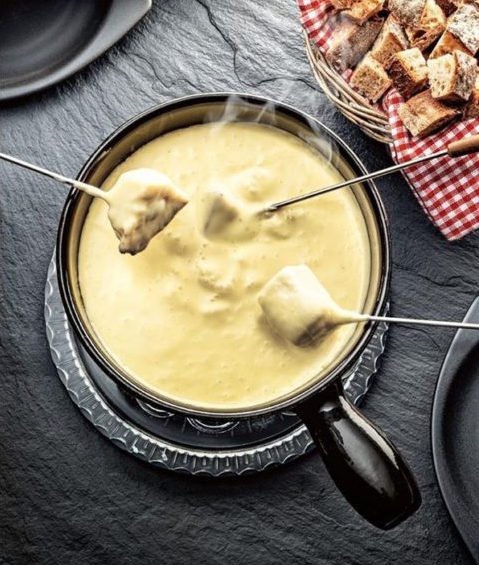 The chef uses a combination of Vacherin Fribourgeois and slightly aged Gruyère. You could use whatever is available. Avoid a dry, well-aged cheese as they tend to be rather salty. Use cheeses that are less than one year old. There’s some notes at the end of the recipe.

Notes: Because of geographical differences, you may or may not be able to obtain the exact same cheeses. But Emmenthal, Gruyère, and Comté are widely available, although as one commenter noted, Emmenthal (sometimes spelled ‘Emmental”) can be stringy when melted.

Vacherin Fribourgeois is a softer cheese, and if you can’t find it, Fontina would make a good substitute. I’ve linked to some recipes below that call for a variety of other cheeses.

For those avoiding alcohol, Chef Prutsch says that he will make a fondue using lemon juice in place of it. I didn’t get a specific quantity, but you can swap out the same amount of water with a good-sized squeeze of lemon juice, enough to approximate the acidity of wine. In fact, some people add a squeeze of lemon juice to prevent the cheese from clumping or to fix a broken fondue, which is good advice if that happens to your fondue.

Categories:Recipes, Swiss Recipes
Shortly About Us